Skip to content
An NGO, Jaksally yesterday made a share out to two groups at the Langater3 community in the West Gonja district of the northern region.Kanyitiwale and Nkpalas) groups did their share out after embarking on fifty-two weeks of savings through the Village Savings and Loans Association (VSLA).

He explained that other equally important assignment has taken the DCE away from the people and apologized for the inability of the DCE to make it to the community.

He thanked Jaksally, an NGO into mobilizing women and the rural poor to cultivate the habit of savings through the Village Susu and Loans Association(VSLA).

‘This is a very productive venture since it has to do with savings, investments and the peoples’ income. It is very good initiative by the NGO in the fight against poverty and improving the wellbeing of the people of the community’.

He asserted that the idea falls inline with district assembly’s action plans because it is a poverty reduction strategy.

Assembly and for that matter government will continue to see to the wellbeing of Ghanaians by implementing social policies such as the National Health Insurance Scheme (NHIS), Planting for Food and Jobs among others.

He adviced the Langater3 community to take advantage of such good policies and help improve their welfare for a better future.

The director said he was very happy to see Jaksally groups contributing to raise an amount of GHc 20,000 from the community.

“This tells us the we are not poor as a people as we think”.

He urged them to use the natural resources available in the area to help improve their welfare and spend much of their resources in educating their children, since education is now controlling the world.

Mr Ankorle adviced that the sum of cash received must be invested in productive ventures so that they will grow their wealth from the grassroots and wipe out poverty from the community.

He urged them to remain united and desist from mingling with active political activities as this can take away the unity they have enjoyed so far.

He was was full of joy seeing more women in the groups.

This, according to him is a good sign of fighting poverty because once the woman is empowered,
the whole family is safe and, he once againI urge all to invest in their wards education for a brighter future’.

The Human Resource Manager for the district, Mr Abdulai Mahama used the opportunity to educate the community members about the upcoming referendum that will lead to creation of Savannah region.

He adviced them to prepare themselves well for the referendum in order for the area to get the region because it will bring development, jobs, improved health among others.

“So I urge you all to prepare yourselves well and come out and vote massive yes for the creation of the region on 27th December, 2018”.

Mr Abubakari Jeremiah Seidu is the President of Jaksally.

He was overwhelmed by the unity that has been chalked since the formation of the groups in the community some seven years ago. He recounted how the community got its first teacher through the activities of the group. A volunteer was tasked to care for the children under a structure since the community didn’t have a school. I then linked the effort of the community to then DCE for the district and now Member of Parliament, Hon Adam Mutawakilu and he quickly responded by rolling the volunteers into the Youth Employment Agency program.

This he said brought a good relief to the teachers and increased their commitment.

Another success chalked by the NGO, aside financial benefits, is the unity that exists in the community.

In the past, things were very tense in the community.

The one but two sided community were not on talking terms, however, with Jaksally activitiesb in the community, both sides of the divide now leave peacefully and do things in common.

As a way of making members gain some financial independence, the NGO is partnering with Vision Fund, a body founded by World Vision to help improve the living conditions of the people most especially women.

He revealed that Vision Fund will support the members of the VSLA with half of the total contributions of group members.

Example, if a group manages to raise GHc20,000 for the period, the group qualifies to receive half of the amount from vision Fund, that is GHc10,000.

He tasked them to be more discipline as this will enable them control their spending and increase their savings for a better future. 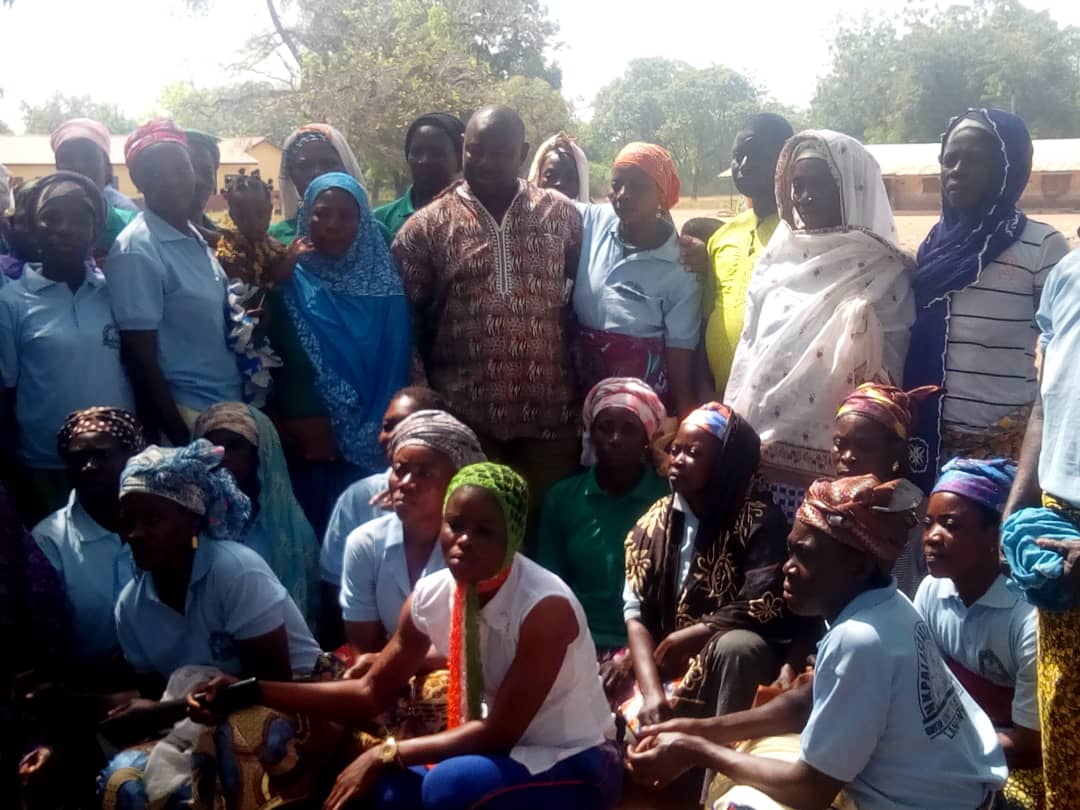 ‘We believe in brighter futures for children,
empowering families to create incomes and jobs, unlocking economic potential for communities to thrive.
“We also, believe in brighter futures for children where they can experience the love of Christ, building lives free of need and full of promise and empower families to create income and jobs’.
Our financial services enable impoverished households to increase their incomes. We train clients to grow successful businesses using their income to support their children and families.
He added that as the microfinance subsidiary of World Vision, we share the same values for all and, that he was very happy with partnership since both institutions serve almost the same purpose.”

‘With these groups, members are now able to send some moneys to our children at school, help take good care of family members, secure funds from the group for farming and business activities among others’.

In the past it was very difficult to subscribe to national health insurance due to lack of money to travel all the way to Damongo to register for the scheme. But with Jaksally VSLA, over 80% percent of the community members were able to pay for the cost and subscribe to the scheme.

Through the groups, community members are able to pay school fees of their children and other family members.

Furthermore, members are able to secure loans for farming, businesses among other important ventures.

JAKSALLY is a developmental NGO and has been initiating many developmental projects in the area.
It collaborates with other organizations such as SNV, Canadian Society for Animal Science, Plan Ghana, MOFA and the District Assembly, for the benefit of rural poor and women, with the objective of empowering and strengthening rural communities in poverty reduction by strengthening the participation of youth and women in community development.

As a process to empower community members, Jaksally offers education, training and development to empower youth and women living in rural communities to increase their knowledge in operating sustainable enterprises in order to live more abundant lives, as part of its mission.

2 thoughts on “JAKSALLY SHARES CLOSE TO GHC40,000 TO GROUP MEMBERS”