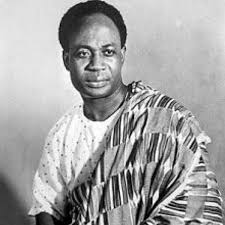 Nkrumah established over 300 industries to cater for the basic needs of Ghanaians by then and for future generations.

Imaging if Nkrumah’s industries were properly managed till date what would’ve happened? For instance,if the construction company existing 60 years now,I don’t think we’ll be going for foreign contractors to do our roads for us today,if for nothing at all,that could’ve saved us a lot of money and also generate employment. But this Nana ADDO and his NPP guys’ forefathers overthrew Nkrumah and destroyed all what he started, just like what their grandson too has done to John MAHAMA.

Nkrumah established state farms to produce fruits,vegetables, foodstuffs, farm animals etc for the consumption of Ghanaians,and may be ,for export as time goes on.

He went further to establish Canaries for preservation of excess farm produce to be used in lean seasons.

Today, half of Ghana’s food (ingredients, foodstuffs, meat,fish,eggs etc) are imported. Ghana imported US$400million worth of rice in 2007/8.

But Nkrumah established rice farm at Avehimey. What’s become of it???

Nkrumah started an electronic factory in this country, they did assembling by then,60 years today, Apostle Sarfo is manufacturing all sorts of electronic gadgets.

This was why Nkrumah made education free to cap it all.”Akuffo Addo, wc nim nyansa! ! !”.Ghanaians,we’re as dump as shiiiit.

we’re dead from our necks up.

Nkrumah established VALCO to produce metal materials for the manufacturing of automobiles in 60 years time.

Today lots of engineers are making cars in this country,including even students.

Nkrumah envisaged that 60 years to come, Ghana will need clothes, machines, electronic gadgets, cars,glass,foodstuffs etc to supply about 30million people and if we’ll have to import such commodities, like we’re doing now,there’s no way we can develop.

That’s was why he had this vision.

Minster for Environment, Science and Tech,Prof B.Frimpong says Ghana has imported over 8 million cars in the last decade. If averagely one of them cost
GH¢10,000.00,this amount multiplied by 8million cars will be GH¢80billion (¢800trillion old cedis sent out of this country IN JUST 10 YEARS! ! ! !).

Nkrumah established Black star line with 15 ships,Ghana airways, with 5 aircrafts by then. State hotels,which were built by state owned construction firms with Ghanaians as workers.

TAKE A LOOK AT THE AMOUNT OF GLASS WE’VE USED TO PUT UP OUR BUILDINGS COUNTRYWIDE, ALL THOSE GLASSES IMPORTED! !

A gold refinery to refine our minerals,cocoa refinery, to produce chocolate and others,etc etc.

Today,Ghana we import everything we use from head to toe,including even toothpicks.

We need to start patronising local products and the government needs to encourage and support local manufacturing.

Nana ADDO should’ve used Apostle Sarfo’s car on his inauguration day and should’ve bought those cars for his appointees just to pave the way for local patronage.

That would’ve also demanded government to jointly establish a whole factory for automobiles with that man, other engineers and stakeholders.

Atleast,this would’ve created employment. But he took our money to buy over 600 exotic cars abroad creating employment for them and he’s asking us to do NABCO.

We don’t need one district one factory, to produce what!? and by which people? If those factory equipment are to be made by the white man, fixed by him and operated by same ,then forget it.

Also,ALL GOVERNMENT COMPANIES, DEPARTMENTS ETC EVEN,INCLUDING, SCHOOLS, ARE THE WORST PERFORMING IN THIS COUNTRY, ALL BECAUSE OF LACK OF SUPERVISION.

So if Nana Addo wants to established factories to be owned by government, then he’d just forget it. Because, we don’t have leaders now in Africa, we got thieves and criminals like Nana Addo, who only come to steal,and this has eaten deep into the very fabric of our society.

We need selfless leaders with visions to solve our problems, not a person like Nana Addo, who’s government is the most corrupt in Ghana’s history.

We’ve a group of technocrats who go by the name “THE HUGE SIX” in this country.It was comprised of the world best mathematician(RIP), the biofuel man,the first black African heart surgeon etc.

One of them says he doesn’t only manufacture cars,but he builds factories which can manufacture 1,000s of cars a day.

Now we got Dr Thomas Mensah on board.

Nana ADDO wants to loot our resources under the cover of so-called flagship programs.
HEY,LET’S MAKE HIM ONE NANA ONE TERM.
We need a revolution in this country and am starting it, so j.