The Chief for Banda Tradition Area in the Krachi Nchumburu District in
the Volta Region, Nana Kwasi Omankuminte II has called on the Government, Volta
Regional Minister, NGOs and Philanthropists to help them eliminate school under
trees in the community.
He said in the education sector the government
has done a lot in constructing school blocks but Banda still have the R/C J.H.S, District
Assembly Primary and the J.H.S all under trees.
“I
will like to use this opportunity to enumerate the problems and the worries we
encounter here to our dignitaries gathered here for support. Banda is the
larger community within the district but lacks so many things a town can boast
of as banda.”
Nana Kwasi Omankuminte II said this at a durbar organize  at
Banda
to usher his 30th anniversary installation as a chief as Banda
Tekpang Owura on 10th November 2018.
He said under his stewardship as the chief of
the Tekpang people, he has put more effort to modernize the Banda seat to open
up for national development.
He deliberate on the benefit Banda has derived
within his 30 years as a Chief.
He mention
that in 1990, he liaised with the than PNDC district secretary, the late Alhaji
Salisu Bio to construct the main road from Banda junction to Banda Buya where Banda
township experienced the first tarred road.
He also
said establishment of the Banda RC JHS, the renovation of it primary school, English
and Arablic primary, JHS and many more.

Furthermore
the paramount chief
of Krachi traditional area in the Volta region, Nana Mprah Besemuna III use the durbar to call on the people of
Banda to continue to support their chief
to bring more development in the Banda community  and called on them to come out on the 27th
of December and vote massively for the proposed Oti Region.

He said the 27th December election
is not for NDC or NPP, it is election which is going to bring development in
the area. He
urge them to come out and vote for the area to get Oti region. He
also caution them from any conflicts on that day. 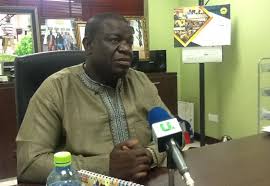 Meanwhile
the Member of Parliament for Krachi Nchumburu Constituency, Hon John Majisi
called on the chiefs to be united to be able to help development in the area.
He
said if the chief are not united it will not bring development in the area.
Hon
Majisi caution the chief to register land own to help them know their
boundaries to stop bring conflicts in the various community’s.
He
said many land dispute in the area are as a result of not issuing certificate
but throwing stones which is not the best.
He added that, chief pay an important role in
the local government. He said traditional roles has play critical role as a
development of Krachi Nchumburu Traditional Area.
He mention that of decisions in communities
regarding to peace keeping, conflict resolution and matters relate to social
issues such as health, community welfare and many more.
Nana
Kwasi Omankuminte II thank the planning committee of the celebration led by Pastor
Marcus, his Linguist Iron , secretary Bawa Dennis, the chiefs, MP, DCEs, the
media and all those who make the program memorable one.
Source :
mark sandow
Spread the love