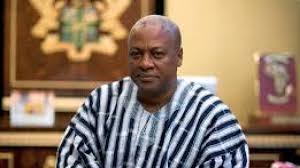 Former President John Dramani Mahama is committed to the creation of the proposed Savanna region.
As part of his commitment, he has donated an amount of Ten Thousand Ghana cedis Gh¢ 10,000.00 to the Bole district local committee of the proposed Savanna region.
This donation was presented to the Bole District Chief Executive Hon. Veronica Alele Herman by the Member of Parliament for Bole/Bamboi constituency, Hon. Alhaji Yussif Sulemana with some NDC constituency Executives.

An amount of Thirty Thousand Ghana cedi Gh¢ 30.000.00 was given out to be distributed to the various districts within the proposed Savanna region enclave to support their activities on the day of the referendum.

This is in addition to the earlier Ten Thousand Ghana cedi, Gh¢ 10.000.00 he paid to the coordinating committee of the Gonja Traditional Council during the public hearings by the commission of enquiry.

He’s also expected to join the overwhelming majority on the 27th Dec, in Bole to cast his vote and return same day.

Once again all and sundry across the proposed Savanna region enclave are expected to show the Jakpa spirit on the 27th Dec at the polls to make this dream a reality.