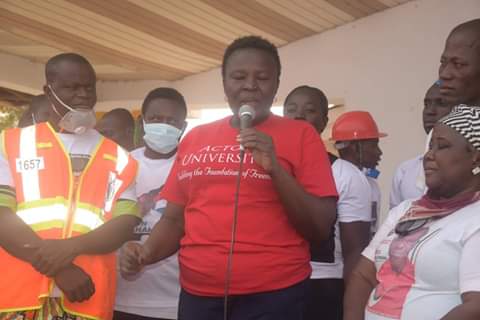 In order to set the pace for her MDCEs, all the fifteen of them were also present to support and learn from the Hon. Minister to enable them replicate same in their various jurisdictions.

The exercise which started at about 6:45am on Saturday 22nd December, 2018, with the Hon. Minister leading one group cleaned some major principal streets including Bolga – Accra highway, saw Hon. Abayage jumping into the drains with shovel and desilting them to the amazement of all. 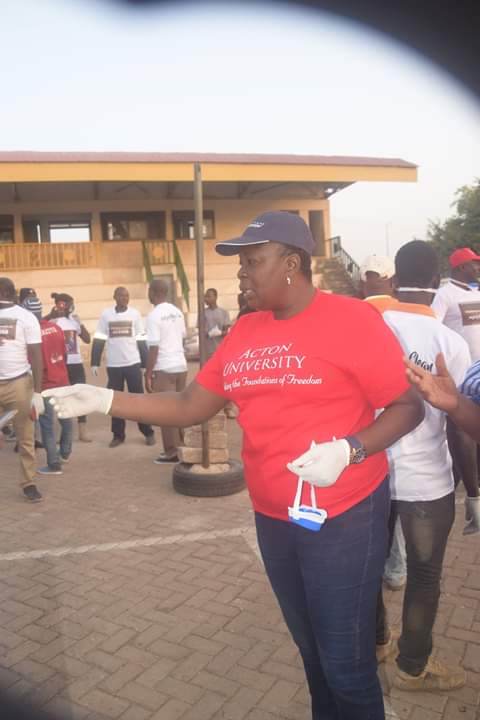 Other major places covered included the lorry station, the markets and other public places with support of sanitation agent Zoomlion collecting the rubbish and other debris removed from the gutter immediately and the Ghana National Fire Service flushing some chocked drains to facilitate the progress of the campaign.

Addressing the crowd at the Jubilee Park after the exercise, Hon. Abayage was full of joy and happiness judging from her countenance. She thanked all and sundry for the massive turn-out to support the exercise.
She said that, one of the biggest challenges in the municipality was the conspicuous plastic bags everywhere polluting the environment.

Hon. Regional Minister, therefore advised the crowd to be conscious of their environment by avoiding littering and properly dispose-off their waste in a responsible manner. She asked them to put the sachet water rubbers in their pockets and handbags after drinking the water, and later dispose them off into dustbins which are at some vantage places in town and avoid throwing them into the drains or the streets because “sickness does not wear party colours”, she emphasized.

She also charged the MDCE’s to replicate the same at their various districts and present reports with visuals to her office in order to keep the entire region neat.
The political parties also took turns to address the gathering, and the Regional Chairman of NDC, Mr. Abubakar Atongo said the clean-up indicated to the whole Ghana that political parties in Upper East Region are united in order to help develop the region.

All the other parties reiterate what the NDC said and a representative of zoomlion which provided some tools like shovels, rakes, standing brooms, hand gloves and nose masks.